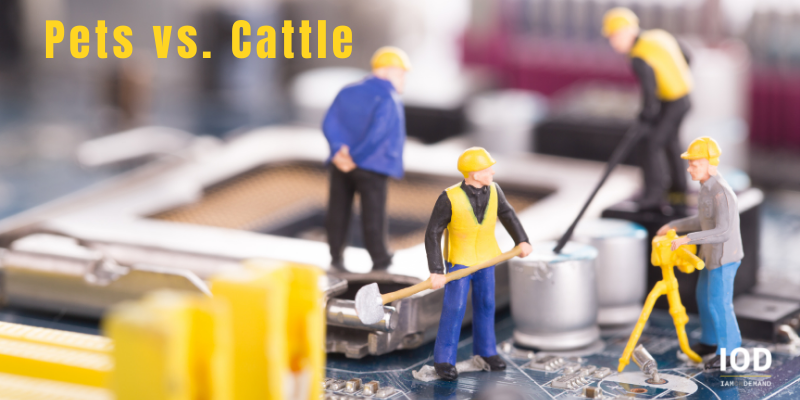 Pets vs. cattle has become a famous analogy for server operations in the infrastructure management space. With the rise of cloud computing, businesses need to have a competitive edge with their applications and ensure high availability and faster response time.

Servers in on-premises data centers are generally viewed as “pets”, whereas servers in the cloud are considered “cattle”. Pets are indispensable servers where you can make configuration changes should problems arise While, Cattle are servers that can be deleted and rebuilt from scratch in case of failures.

There is a difference between how we treat servers in an on-premises data center versus in the cloud. Unlike traditional, on-premises servers—which must be maintained and can’t be destroyed—servers in the cloud are treated as transient. The major cloud providers like AWS, Azure, and Google Cloud can help you achieve immutable infrastructure at different layers in your application stack.

Distributed systems are rapidly adopting the concept of immutable infrastructure. Building immutability into your system architecture has several benefits. In simple terms, having an immutable infrastructure means that if you want to make any configuration changes to a server, you don’t modify the existing server—rather, you build a new server with the updated configurations.

Modifying a server while it’s running is an error-prone process and can introduce catastrophic changes. Building your infrastructure from the ground up with the new configuration and having a proper testing strategy before deployment is the way to go.

When you don’t have to deal with drift detection within your components and can replace your components instead of modifying them, your operations become simpler. By having an immutable infrastructure, there is no need to manage a large number of production servers. This means your development teams can focus on application changes and let your infrastructure automation ensure consistency between environments.

When dealing with infrastructure, failures are inevitable. But having the ability to replace your nodes in an automated way helps you recover from failures quickly. Without an immutable infrastructure, you’ll need to spend time troubleshooting the issue and fixing it. However, you can terminate and rebuild an instance from scratch with an immutable server using an updated base image.

Once you start using the base images to launch your infrastructure automatically, you can dynamically scale your environments based on your application load. When the load decreases, you can also gracefully scale down your workloads. Having the ability to spin up identical instances with a small startup time helps you implement a strategy for dynamic scaling and optimize the use of your infrastructure resources.

As part of your CI/CD pipelines, you must deploy your application to different environments like DevQA, integration, staging, and live.

Have you encountered scenarios where the changes to your code work fine in a lower environment but not in live?

When applying security patches or updates to your traditional infrastructure, you might face issues after the upgrade. How do you handle scenarios where the patch introduces some breaking changes? What happens if you reboot your server after the update and it doesn’t start back up?

With immutable infrastructure, you apply the security updates to the base image, run validation tests, and then publish the image to be used by your applications. As a best practice, you should also build your base images regularly to ensure that all your agents are up to date. This process works effectively from a security perspective, because you build your instances from the ground up every time using the approved and tested base image.

Managing Modern Infrastructure in the Cloud

The concept of cattle farming goes well with running services on containers and using popular container orchestration tools like Kubernetes. You can compare the “pet-to-cattle” model with the “bare-metal-stack-to-containers” stack.

Enterprises are steadily migrating their workloads from on-premises to cloud infrastructure, and in the process, adopting the cattle model with containers and Kubernetes. Treating your application deployments like cattle rather than pets provides a stable environment with higher uptime. Immutable workloads are preferred so that you can rebuild your infrastructure through automation.

Immutability is one of the greatest strengths of container-based workloads. While designing your cloud-native architecture, ensure that your containers are immutable and that you don’t modify your applications inside an existing container. As a best practice, you should also package your application and all the dependencies into a container. When you need to make changes to your application or patch the running container, you should deploy a new container version. Applying the principle of immutability at the application level allows you to simplify your deployment strategy and make it more repeatable.

How to Make Your Applications Immutable

Embracing the concept of immutability in your architecture can be a paradigm shift. It does introduce complexity into your workflow, and requires a high level of automation and testing to verify the correctness of your implementation. You’ll also need to leverage various tools and managed services from your cloud providers to simplify development efforts.

At the application layer, you can achieve immutability by using containers. Compared to legacy monolithic systems, implementing container-based deployments for microservices architecture is more straightforward. To handle dynamic workloads at runtime, you can have auto-scaling groups for your services so that you can scale up or down based on load.

You can also templatize your computing environment by creating a golden image and reusing it to set up more environments in an automated way. A golden image is an immutable object containing your standard configurations, latest security patches, and container agents used for monitoring, logging, security, etc. As a best practice, you should have a separate CI/CD pipeline to regularly build your golden images. This will ensure that there are no security vulnerabilities and that your environments are updated with the latest security patches.

There are several managed services in the cloud that support the blue/green deployment model. And you get zero downtime deployments with this strategy and can also easily roll back changes in case of issues.

The migration of traditional applications to the cloud-native space requires automation of your IT infrastructure to increase service uptime and response time. The transition from pets to a cattle service model is crucial in your operational process, helping businesses provide better service with minimal downtime. Cloud-native applications embrace the cattle service model and scale in and out without tight coupling with the underlying server.