According to Gartner’s report “Reimagining IT: The 2011 CIO Agenda”, almost half of all CIOs expect to adopt cloud technologies within the next five years. Not surprisingly Gartner’s analysts expect an extreme increase from 3% to 43% of the IT organizations that will run applications in the cloud. No doubt that most of the IT organizations already adopted SaaS, IaaS adoption is evolving rapidly and PaaS gain momentum.

CIOs recognize that they need to reposition themselves and IT to support enterprise innovation and growth. However, two issues stand in their way: benefits realization (the achievement of business benefits) and IT skills. Skills are an issue because CIOs rely on bringing skills in from the outside whenever they need to get work done (see figure below). Both issues will prevent IT from reaching full potential unless the CIO addresses them 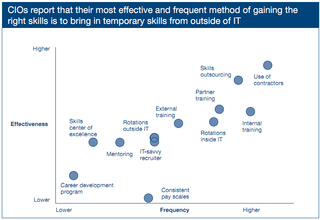 
In this article we will focus on the change that should happen inside the enterprise’ IT team. Whatever it is a small or a huge enterprise, the changes are real and the basic questions we can ask are – what are the new cloud management skills? and how and the IT organization can acquire them?

Positive results come from having the right people with the right skills on the right projects. Unfortunately, only one in five CIOs has a high degree of confidence in the skills of their team. How do CIOs get the skills they need? Most hire temporary resources to cover the gaps. This gets the job done but creates a skills crisis, as IT personnel do not then have the opportunity to upgrade their skills to create and sustain business results

The list of aspects of system management is not really change, though the means including actual activities and tools do change, hence the need to acquire new skills. Time to market is important but should the cloud skills be outsourced? Following Gartner’s report and our experience helping IT leaders manage their cloud we find that having cloud management skills inside the generic IT team is inevitable. Like every other business the ratio between the investment on outsource to establish internal skills must be balanced an under tactical and strategical considerations that the CIO should take.
By his short post blog  I Don’t Want DevOps. I Want NoOps by on forestter site,  initiated Mike Gualtieri a great (and long)  discussion that we strongly suggest to read. The following is just the highlight of his mind:

A lot already been said about the changes that the Ops team will have to go through, some even sat that the new IT organization should aim to NoOps. Following our experience with the real world we find that the Ops team takes care of the cloud management operations including at least the following responsibilities:

While the Ops team manages the environment operations, the DevOps are ones that that build  the communication layer between the IaaS and the application run-time compute requirements. Adopting the cloud, the traditional ISV’s R&D must hold DevOps skills where the operations department (i.e. Ops.) are responsible for the SLA commitments. In order to plan the development of a robust and automatic scalability, the ISV architects must understand the cloud highly dynamic nature that is to say the basic option to start and shut down resources automatically by a the runtime script. The software developer together with the Op guy should pick the IaaS vendor as part of the initial development step, learn the IaaS platform’s API capabilities and make sure that the development roadmap includes also a tight integration with the cloud facility. “Developers are from Mars” – Read  more about the need for a strong relationship between Devs and Ops
Whether it is an ISV or any other type of the IT organization this discussion have additional features such as the cloud layer (i.e. SaaS PaaS or IaaS). Most enterprises already adopted SaaS out-of-the-box online services such as Salesforce. We find that often the Ops team is the one that approves a business request to purchase a new online service hence, the team hold responsibilities on the SaaS applications inventory including aspects such as apps administration, integration, etc. In regards to the IaaS layer, the Ops team decides which IaaS vendors and hold most of the knowledge in regards to maintenance and provision of  the computing resources. In regards to the relation between DevOps need and the evolving PaaS options says Tom Mornini, EngineYard CTO:

“The appeal of the DevOps model fades even further when you consider the fact that there is a better option! You can achieve the intended benefits of DevOps without any of the turmoil by taking advantage of Platform-as-a-Service offerings, or PaaS.”  Read more on his ZDnet blog post “DevOps is DOA”

PaaS is the most controversial in regards to the need for the Ops team as the PaaS vendor actually removes the operations’ hassle includes most of the management aspects mentioned above.
The question about the IT team extinction and the evolution of DevOps or even NoOps doesn’t have one answer and it depends on the IT organization manner and objectives. Both the IT guy and the developer must acquire cloud knowledge and skills in order to remain one of the team. Operations and development team must get closer in order to be able to deliver a successful online service. Quick jobs search in Linkedin returns Ops jobs such as you can see below.  There are a lot of opinions and predictions in regards to the operations team are but the evident fact is that today there is still a real need for cloud Ops in order to maintain an robust online environment.