Amazon AWS is the Cloud (for now anyway) 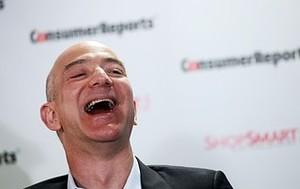 Every day I talk, write and comment about the “Cloud”. Every time I mention the cloud I try to make sure that I add the name of the relevant cloud operator, “Rackspace Cloud, “MS Cloud” (Azure) or “HP Cloud”. Somehow all of these cloud titles don’t right to me – it seems the only title that really works for me is the “Amazon Cloud”. In this post, I will elaborate about the competition in the IaaS market and I will explain further why I think this is so.


HP vs. Amazon AWS
Earlier this month, HP announced release of a public cloud offering based on Openstack in a public bet. Zorowar Biri Singh, SVP and GM for HP Cloud Services, admitted that HP is really late to market and he also added that:

HP believes that startups – particularly those that sell services to enterprises – will want to move off Amazon as they grow but won’t want to build their own data centers. Read more

Last year I attend the HP cloud tech day. It was amazing to see this giant fighting for its life on the IT field. It is one thing to be able to promote public cloud, but you also need to select your words carefully. Singh’s statements aren’t in line with a public cloud strategy; on the contrary, they focus on the fact that HP’s state of mind is not ready for delivering a true public cloud. Establishing a public cloud is one thing, but leading with the right strategy is what counts – trivial isn’t it?

We’re not necessarily the first place a startup is going to look for in getting going. But I can assure you we’ve also got the type global footprint and an SLA and a business-grade point of view that understands the enterprise. That’s what we’re betting on.

I strongly suggest Mr. Singh be more careful. Specifically, these types of statements remind me of Kodak –  they claimed to have a strong hold on the market, they maintained that as people shoot more digital photos eventually they will print more. On January this year the 131-year-old company filed for bankruptcy.
SAP on Amazon AWS

Due to market demand forces, SAP was forced to find its way in the cloud. In 2007, SAP announced the launch of BusinessByDesign, its (SaaS) On-Demand initiative, with no success while their customer base drifted to companies like Salesforce and Netsuite. This month SAP finally announced that they believe in the public cloud by making an interesting supportive move and partnering with the Cloud – Amazon AWS.

Customers now have the flexibility to deploy their SAP solutions and landscapes on the scalable, on-demand AWS platform without making required long-term commitments or costly capital expenditures for their underlying infrastructure. Learn more about the offering. Read More

This SAP certification strengthens the AWS position in the enterprise (for your attention Mr. Singh). IMHO SAP made a great decision to “go with the flow” and not resist it.
Openstack vs. Eucalyptus for Amazon AWS
Openstack was initiated by Rackspace and NASA in 2010. Today this cloud open source project is supported by about 150 IT and hardware companies such as Dell and HP, which trust this platform and are investing in building their public cloud with it.

It’s maybe two or three years before OpenStack will have matured to the point where it has enough features to be useful. The challenge that everyone else has is Amazon is not only bigger than them, it’s accelerating away from them.   –Netflix cloud architect Adrian Cockcroft

In March of this year, Amazon guys published their belief in the private and hybrid cloud by announcing their signed alliance with Eucalyptus, which delivers open-source software for building an AWS compatible private cloud. In April, Eucalyptus published its $30M series C funding. Together with Amazon and SAP’s joining of forces, this accentuates the fact that Amazon AWS is very seriously about conquering a share of the enterprise IT market (again ..for your attention Mr. Singh). This week I attend IGTCloud  OpenStack 2012 summit in Tel Aviv. I was hoping to hear some news about the progress and the improvement of this platform and I found nothing that can harm the AWS princess for the next few years. OpenStack is mainly ready for vendors who wants to run into the market with a really immature and naive cloud offering. I do believe that the giant vendors’ “Openstack Consortium” will be able to present an IaaS platform, but how much time will it take? Does the open cloud platform perception accelerate its development or the other way around? Still, for now, Amazon is the only Cloud.
Microsoft and Google vs. Amazon AWS
This month Derrick Harris published his scoop on GigaOm –  “Google, Microsoft both targeting Amazon with new clouds”. I am not sure whether it is a real scoop. It is kind of obvious that both giants strive to find their place in Gartner’s Gartner Magic Quadrant report:

With regards to Microsoft, the concept of locking in the customer is in the company’s blood and has led the MSDN owner to present Azure with its “PaaS first” strategy.  I had several discussions with MS Azure guys last year requesting to check the “trivial” IaaS option for self-provisioning of a cloud window instance. Already back then they said that it was on their roadmap and soon to be available.
This month AWS CTO Werner Vogells promoted the enablement of RDS services for MSSQL on his blog, noting:

Is that good for Microsoft? It seems that Amazon AWS is the one to finally enable Microsoft platforms as pay-per-use service that is also compatible with the on-premise MS application deployments. One can say that by supporting this new AWS feature, Microsoft actually supports the natural evolution of AWS to become a PaaS vendor, putting their own PaaS offering at risk.
IMHO, Google is a hope. The giant web vendor has the XaaS concept running in its blood, so I believe that once Google presents it IaaS offering it will be a great competitor for AWS and Openstack ways. Another great advantage of AWS over these guys, and others, is its proven “economies of scale” and pricing agility. Microsoft and Google will need to take a deep breath and invest vast amounts of money to compete with the AWS – not only to build an IaaS vendor experience  but to improve upon their pricing.
Final Words
I can go on and discuss Rackspace cloud (managed services…) or IBM smart (enterprise…) cloud. Each of these great clouds has its own degree of immaturity in comparison to the Cloud.
Last week I had quick chat with Zohar Alon, CEO at Dome9, a cloud security start-up. The new start-up implemented its service across respectable amount of cloud operators.

I asked Mr. Alon to tell me, based on his experience, whether he agrees with me about the state of the IaaS market and the immaturity of the other cloud vendors in comparison to AWS cloud. He responded:

The foresight to include Security Groups, the inbound little firewalls that protect your instances from most network threats, was a key product decision, early on by Amazon AWS. Even today, years after Security Groups launched, other cloud providers don’t offer a viable comparable.
The cloud changed the way we consume computation and networking so we can’t (and shouldn’t be able to) call our cloud provider and ask them to “install an old-school firewall in front of my cloud”. Amazon AWS was the first to realize that, and turned what looked like a limitation of the cloud, into an advantage and a competitive differentiator! At Dome9 we work with DevOps running hundreds of instances in a multitude of regions and offer them next generation control, management and automation for their AWS security, leveraging the AWS Security Groups API.

I am sure that this basic security capability must be delivered by the cloud operator itself. Cloud company is a new perception, it is not technical – it is strategic. Amazon follows its strategy with some of cloud basic guidelines: Continuous Deployment, Fast Delivery, API first, Low level of lock in, Full visibility and honesty, and so on. When Amazon AWS started in 2006, people didn’t understand what they were doing though the company leaders understood the business potential. Without a doubt, for now anyway, the Cloud is Amazon.
(Cross-posted on CloudAve Cloud & Business Strategy)